Do you feel as if it is time for you to get a new watch?

Perhaps your current one is worn out, it doesn’t fit your style anymore, or you’d like something just a little bit better. Regardless of your reason behind wanting a new watch, the reason you’re reading this is that you have bigger problems on your hand …you can’t seem to figure out which watch you should get. Should you get the G Shock Rangeman or the Mudman?

Is the Mudman better than the G Shock Rangeman?

Continue reading to find out …

Both the G Shock Rangeman and the Mudman have amazing durability. What’s really interesting is that both of them are shock and but resistant, so both of them are built to last. They are both resistant to temperatures down to 10 F.

The Rangeman and Mudman have dial windows that are made of mineral glass, which means they are scratch resistant. For those of you that don’t know, mineral glass is around seven times harder than the traditional acrylic glass dial windows you find on some of the other watches.

So, in terms of durability, both of them take home the prize – they would be great for everyone, even military, fire, police, and rescue workers, as well as survivalists. 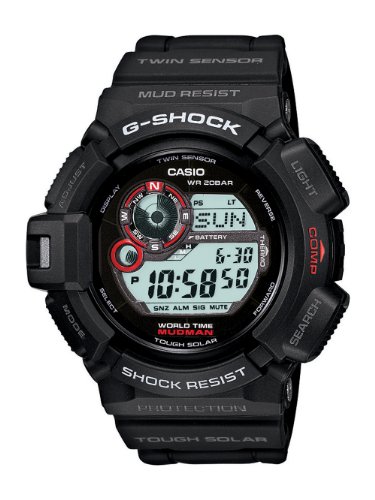 For those of you that are interested in keeping up with the phases of the moon, then you’re going to like the Mudman because it has a nice moon phase calendar. The Rangeman, however, does not have this feature, so Mudman gets a one up there. This is a feature I know fishermen will enjoy because during full moons, the fish are really biting – this is because the tides are highest during this time. Sure, you could keep up with the moon phases yourself, but this is still a good feature to have.

Sunrise and Sunset Data – The Rangeman

If you need to know the time in another time zone for whatever reason, then this is a great feature to have – both of these watches have this feature. World time will show you the time around the world across multiple time zones, all at once. Mind you, the only difference would be the fact that the Mudman isn’t going to automatically update your time zones because it doesn’t support atomic timekeeping, but the Rangeman does. So, this means if you were to go with the Mudman, you’re going to need to update the time every couple of months in order to make sure it’s accurate. 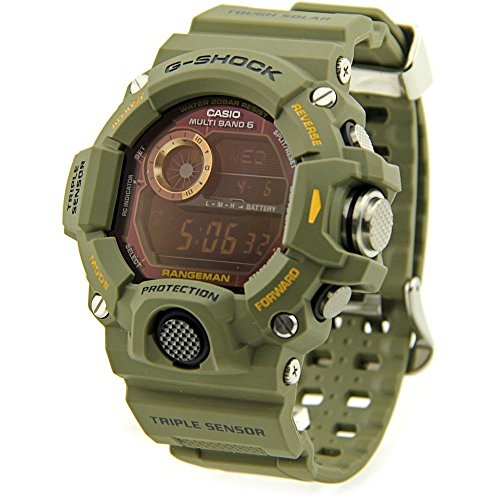 There’s just something cool about watches that come equipped with a solar panel (I always liked those when I was a kid, and today that is still true). Fortunately, both the Rangeman and the Mudman have solar power, so you’re never going to have to worry about replacing a battery unless you live in complete darkness the entire year.

Both the Rangeman and the Mudman contain a digital compass. Personally, if I were to carry a physical compass around, it’d probably get lost, so this is a feature that comes in handy for people like me.

On both of the watches, in order to access the compass feature, all you have to do is push a button.

On the Rangeman, the compass shows a digital ticker that is pointing to the North. The watch will also show the direction you’re facing, as long as you’re holding it parallel to your chest.

The Mudman shows a digital compass dial that points to the north based on the direction you’re facing during the time.

When I looked at these watches, I felt that they almost looked the same. Both of them are black and have a black band and they even have the same type of display. They both have red accents that run around the display of the watch – this highlights the key areas.

Regardless, both of the watches look great and I understand that this makes it even harder to pick between the two. 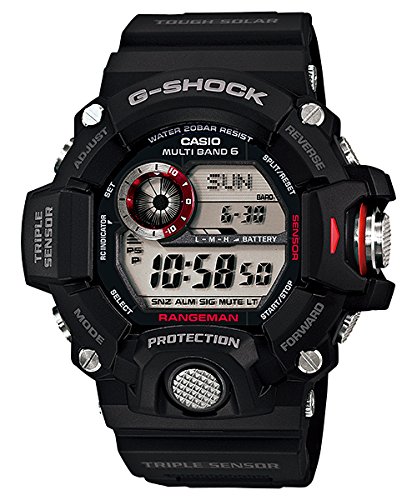 Both of the watches are great, look almost identical and have similar features.

The Mudman is more affordable than the Rangeman, which is a bonus and we cannot overlook the tough solar power that Casio is well known for. It lacks a couple of useful sensors and the atomic timekeeping method, but that really isn’t that big of a deal.