If you are planning on becoming a SEAL, buying a watch for a gift for one, or just interested in what watches they wear, hopefully this article will give you the research needed so you can make an informed choice.

What Type of Watches Do Navy Seals Wear

There is no Official Navy Seal Watch though certain watches are more popular than others. G- Shock are popular amongst the military world wide so it is comes as no surprise that they are worn by many Navy Seals.

Other popular brands include Suunto and Seiko, obviously watches designed for diving that are rugged and reliable will be required. Black watches that have no shiny metal are going to be the top picks. Watches worn by navy seals will be functional and in most cases not overly expensive.

Though a small minority of SEALS might wear Luminox, expensive brands like Rolex or Omega aren’t likely to be worn in the present day.

Historically Navy Frogmen were actually issued Rolex Submariners but eventually this got too expensive and with the advent of cheaper waterproof digital watches and this was fazed out.

Briefly the Timex Ironman became the watch of choice but in the 90’s G-Shock became the more popular watch.

With the launch of the Casio G-Shock DW-6600 in 1994 this became the go-to watch for Navy Seals and G-Shock became synonymous with military and tactical units World-Wide. The watch, Shock proof with water resistance to 200 meter also had the ability to remain illuminated for a short time after the backlight button was pressed. Along with its functionality it was also an inexpensive option.

The DW-6600 is now discontinued, you might be able to pick one up second-hand but the watches listed below are some of the most likely watches that Navy Seals wear at the moment. 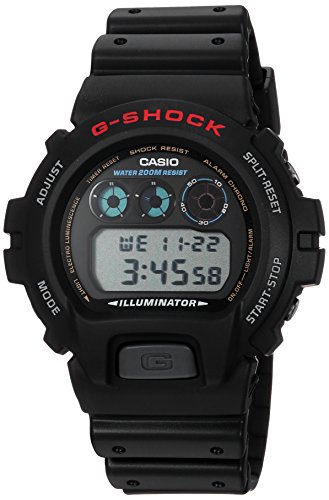 This is the modern equivalent of the DW6600 it uses the same bezel and five button functionality. These watches are worn by SEALS, Law Enforcement, EMT’s and pretty much any other profession that requires a tough job. The watch is water resistant to 200 meters and comes with a EL Back-light with afterglow. The main thing though is that the watch is super inexpensive so if for some reason it does get busted up [ which isn’t likely] it can be easily replaced.

You don’t find many complaints about any watch in the G-Shock range, the only real negative we found is that some found the watch strap a little small but if this is the case it can easily be changed over.

There is a solar model of the DW6900 as well which is a bit more pricier but comes with added features such as solar charging, World Time function and Multi-Band 6.

Really you can’t go wrong with either of these watches 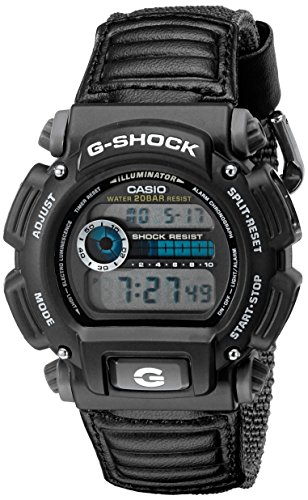 This is another inexpensive watch from G-Shock that gets great reviews. If you are in the market for a military, dive style watch this would suit your purpose. Many reviewers of this model online have a military background so this would certainly be a good choice. 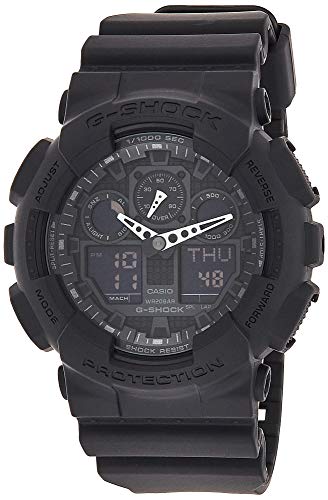 This is would be another excellent choice as it is actually designed for tactical use and comes with a simple black mat finish. As usual it is water and shock resistant and keeps military time with a digital readout. This one seems to be the most gifted to military personnel with many reviewers online buying for sons, brothers and husbands who are serving.

Some reviewers have complained about the illumination being low but the there is a reason for this and that is that it is a tactical watch. You don’t want your watch lighting up like a beacon during combat ops.

Once again with the features and functionality this is a great watch from G-Shock and affordable for most as well. This is a watch that would look good on the wrist for a Navy Seal or otherwise.

All in all a nice looking military grade watch.

G-Shock have a large number of watches that would fit the bill, so if the one’s above aren’t what you are searching for then keep on looking. They have many military inspired watches and the G-Shock Frogman is another great dive watch that would be in our short-list but it is in a much higher price bracket than the other watches listed above.

Other Watches Worn By Navy Seals 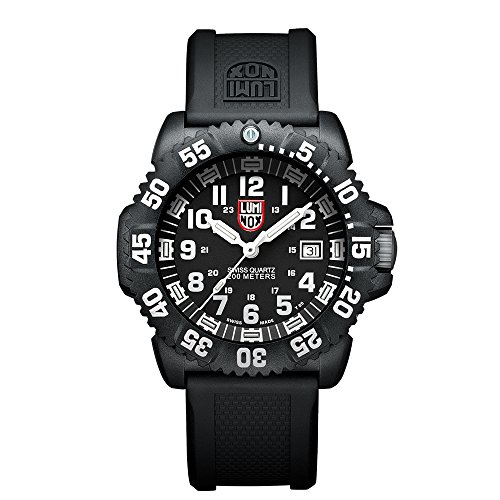 We have already reviewed the Luminox Evo Navy Seal Blackout Men’s Watch Here if you want to read a full detailed review.

How many Seals actually wear this ‘Official’ Navy Seal Watch is debatable.

This Luminox does tick all the right boxes though it is water resistant to 200 meters, the Blackout version would be great for any Tactical Ops and is excellent in areas with low light.

Its a bit pricier than most of the G-Shock watches but we’d still say it is a watch to consider if you have the budget for it.

Click image for pricing info on AmazonSeiko have a range of dive watches available but our favorite is the SKX007K. Navy Seals have been known to wear Seiko and they are known for their quality. Once again these are pricier watches than the majority of the Casio watches but these watches would look good on your wrist at any occasion not just for deployment.

The 007 is a popular dive watch with collectors as well as being popular with those who are looking for a quality, rugged water resistant watch.

If you are interested in an analog watch rather than digital and have a couple of hundred bucks to spend this could be of interest to you.

This is a kinetic watch – it automatically powers when you move your arm so will work without batteries.

There are reviewers online who have compared this watch to the much pricier Rolex Submariner and Omega Seamaster.

Some reviewers did have an issue with the 007 loosing time but from what we can gather is that they were removing the watch for longish periods of time and as this watch is powered by arm movement this was the reason why.

We notice that a few users preferred a NATO strap and replaced the strap that is included.

The NEC 5326 from Kobold is manufactured specifically and exclusively for SEALS. This means if you are not a SEAL you can’t get one.

There is a civilian version though if you can afford it. This is a very high end watch with Swiss-made quartz caliber movements that work in sub-zero temperatures.

Celebrity Navy Seals – What Watches Do They Actually Wear

If you are a fan of military books and movies like us then you will be sure to know of Chris Kyle the author of American Sniper and a real life hero who had over 160 kills in his 4 tours of Iraq.

He is know for wearing 3 different watches

In active service and in the movie where his part is played by Bradley Cooper he wore a Casio G-Shock DW-6600.

As we mentioned earlier this was the G-Shock watch that ensured that G-Shock became the watch of choice for military personnel world-wide.

The classic Rolex Submariner was another watch worn by Kyle though not while on active service. In the book it is mentioned and it was a gift to him from his Father-in-law.

In recent pictures before his untimely death he is seen wearing a Resco Patriot.

The Patriot is a watch that is actually designed by a SEAL so the functions and features are exactly what a SEAL would need. Not only is Rob Smith the founder a SEAL he is actually on active duty!

The RESCO Patriot is water resistant to 200 meters. It also has a shock resistant stainless steel case which is anti-magnetic. These are quality made heirloom watches and RESCO only make a limited amount every year.

These watches are actually field tested by actual operatives who provide feedback to RESCO. In the early days of the company protoypes were issued to a select few SEAL recruits for Hell Week. Only 25% of candidates make it through Hell Week but All the RESCO watches survived it!

If you are looking for a Special watch that it also functional and proven in the field by real SEALs then this would be a great pick.

Jocko Willink must be the celebrity Ex Navy Seal whose watch gets the most exposure. Every morning when he gets up at 4.30am he posts a picture of the watch on social media showing the current time to motivate his followers in joining him getting up early. 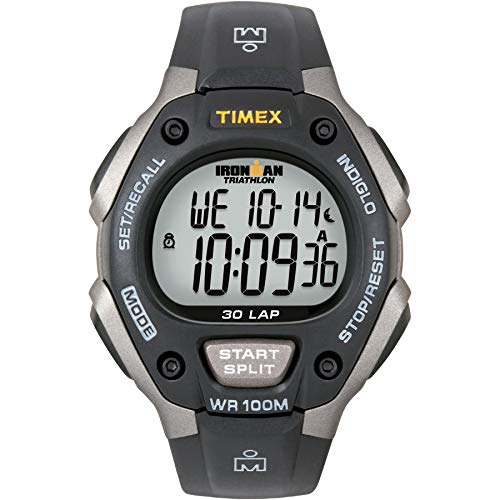 The Ironman watches are water resistant to 100 meters unlike most of the watches reviewed here that are resistant to 200M. We like the indiglo light which is bright and you can activate it with any button which makes it very simple to operate in the dark.

Really these watches are designed for sports use and they are excellent for this purpose. You can set this watch for Military time and we have seen some reviews from military personnel who rate Ironman watches highly.

We’d  interested to learn which watch Jocko  actually used while on active duty.

In the movie Zero Dark Thirty the Navy Seal Team that go into Bin Laden’s compound to assassinate him are all wearing Suunto Core watches. OK its a movie, the likelihood is that the team would be wearing a mix of watches.

If you’ve never seen the movie check it out, here’s the trailer below

But Suunto’s are popular with Seals, which takes us to the…

Basically with the Suunto Core you have a mini wrist-top computer. For those who like their watches high-tech as well as functional then the Suunto Core is one to look out for.This is a military grade watch but it does seem to have a few issues such as with buttons sticking. Some Users weren’t overly impressed and swapped the watch strap with a zulu Tactical.

The guy in the review below [opens in a new tab] has had his Suunto Core for over six years and has used it for Military and Firefighter and Paramedic use, so its been through its paces.

Check Out the Review Here

This is one of those watches that users seem to love or hate. Aesthetically it has got to be one of the nicest looking watches reviewed here.

So as you had discovered there is no official Navy Seal Watch though some market themselves as such. You really can’t go wrong with a G-shock but if you want something to wear off duty or just don’t like the look of a Casio make sure you check out some of the others.